Student loan debt is one of the highest consumer debts in the category of loans and proves higher than both credit cards and secured form. The statistics edition presented in this article will provide data on loan outlays, payments of loans and borrower activity for English domiciled learners pursuing Higher Education (HE) and Further Education (FE) in the United Kingdom (UK) and European Union (EU) studying in England, and it covers the financial year of 2018.

To hold a better understanding of the loan and the statistics that will be presented in this article, it is extremely necessary to understand the few key terms that are related to the student loan.

Student Loan: Student loans are grants that are provided by the Student Loan Company (SLC), loan brokers, and lenders to the resident students in the UK. This loan is vastly utilized to pay for the tuition fee and university fee.

Student Loan Company (SLC): SLC is the company that is responsible for the student finance in states like England and Wales and is a delivery partner of student finance Northern Ireland and the Student Award Agency for Scotland.

Domicile: The usual and common residence of a student apart from temporary or random openings in the appropriate period former to the origin of the study.

Written-off Loans: The borrower becomes accountable to repay the loan, but the compensation of such loans is considered to be questionable by the loan officials and lenders.

The year 2018 has been all about Brexit and the associated changes and updates that were witnessed during the period about the student loan in the UK. It started with a closing amount of £16 billion and £583 million at the end of 2017, which was lent by different lenders to undergraduate learners and postgraduate students as Student Loan. The total loan balance at the end of the financial year 2016-2017 was £3.7 billion. At that time, the new lending and the interest rate added outweighed the repayments made by the borrowers who were liable to repay. 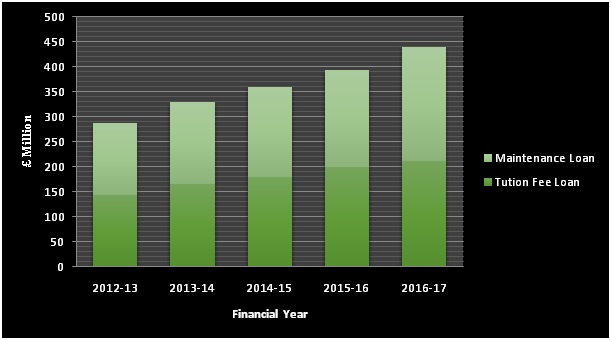 • As of 2018, more than a million student loan borrowers have approximately a maintenance loan debt of 5,458 million in England.

• More than a million student loan borrowers have debt greater than 8,506 million in Tuition Fee, and 538 million of that total holding student loan debt on Masters in England.

• In EU, the range of Tuition Fee Loan reached up to 444 million, and the Masters Loan of around 45 million or above in total.

The graph below will help you understand the debt percentage better: 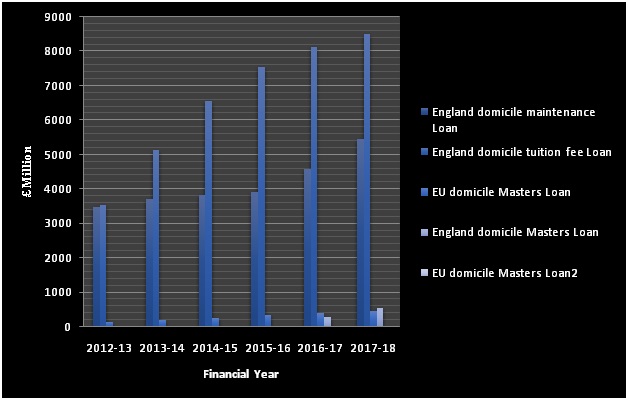 As the year reached its first quarter, the government decided to halt loan payments of the students pushing them towards a state of vulnerability. Also, the (SLC) Student Loan Company was accused of “KGB tactics” for accessing the loan eligibility of learner borrowers. But, later on, the biggest disclosure came when the government decided to put the debt of £12 billion to its spending, reflecting the loan amount to be never repaid in the future.

The massive assembly of student loan borrowers in the UK is under 30-years-old usually, attended by the 30-39 age groups. 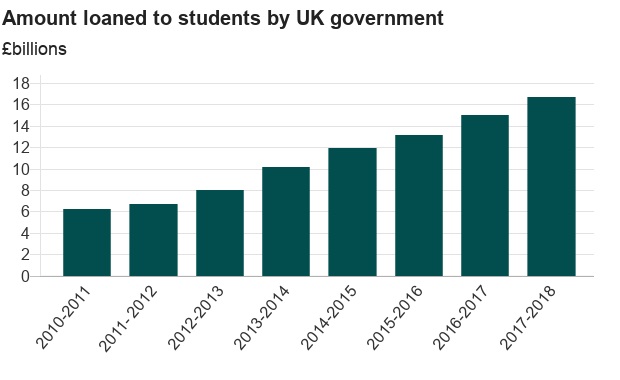 The loan balance is increasing every year as increased lending and the interest figured to the current balance outweighs the payments and write-offs from borrower’s records.

The below chart comprises all borrowers in all repayment groups as on 30 April 2018 for higher education. 19% no longer hold any Loan Balance, mainly due to full payment and 69% are in the UK Tax policy. The pie diagram shows how the number and percentage of borrowers in every repayment status changes by the group. 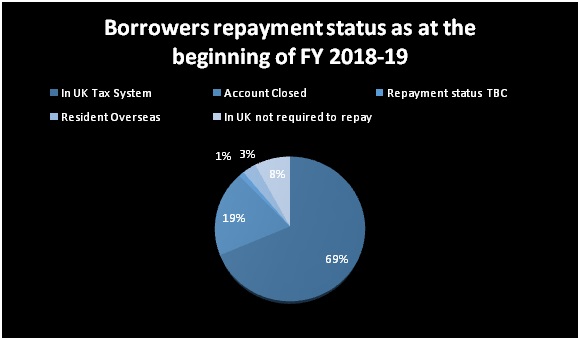 (The above student loan debt statistics include data from the Student Loan Company (SLC) statistic publications, Statista, and the general information available on news platforms like BBC, Independent, The Guardian)

With the ease of access to student loans with no guarantor, people have started opting for more and more from outside or external loan sources. Because such type of loan doesn’t demand another person to be liable for your loan repayment. You are responsible for your own loan repayment. Therefore, if you are opting for an FCA registered loan broker, make sure you weigh your options before borrowing. Borrow responsibly and invest wisely.

Warning: Late repayment can cause you serious money problems. For more information, go to MONEYADVICESERVICE.ORG.UK Credit subject to status & affordability assessment by Lenders. Loan Princess is a credit broker and not a lender

Think carefully before securing debts against your home. Your home may be repossessed if you do not keep up repayments on any debt secured against it.

The rate you are offered will depend on your individual circumstances.

All loans are subject to status. The interest rate offered will vary depending on our assessment of your financial circumstances and your chosen loan amount.

Authorisation can be checked on the Financial Service Register at www.fca.org.uk.